Barcelona's day of infamy —  the Army uprising which shaped the nation of Catalunya for more than half a century — began in Pedralbes, at the Bruc barracks.

In the early hours of Sunday, July 19th, 1936, Major José López Amor arrested the Colonel commanding the barracks and the General in command of the 10th (Badajoz) Regiment of the 7th Infantry Brigade. López assumed command, assembled the men, and told them that their orders were to put down an anarchist insurrection.

The 600 troops, equipped with 17 machine-guns and 4 heavy mortars, and accompanied by a rabble of around 150 armed Falangists and a light cavalry escort, left the barracks and proceeded along what is now Avinguda Diagonal, toward the city centre where they were to link up with cavalry and artillery units converging on Plaça Catalunya.

In the nearby barracks on Carrer Numància the 10th Cavalry (Montesa) Regiment also joined the rebels and prepared to link up with a battalion of army engineers at Plaça de Espanya.

At the Girona barracks on Carrer de Lepant in El Baix Guinardó, the 9th Regiment of the 2nd Cavalry Brigade prepared to advance on the city centre and link up with the infantry en route from Pedralbes.

In Poble Nou, on Avinguda d'Icària, the 1st Mountain (Artillery) Regiment, equipped with twenty-four 10.5 Skoda guns prepared to advance on the Christopher Columbus monument at the bottom of Les Rambles.

In Sant Andreu the 7th Regiment of the Artillery Brigade, composed of two groups of three batteries, each equipped with four 10.5 Vickers guns, prepared to advance on the city centre.

In their barracks on Gran Via, very near Plaça d'Espanya, 400 men of the Engineers Battalion prepared to take control of the plaça.

At the barracks in Ciutadella only half the officers of the 34th (Alcántara) Regiment joined the insurgents.

In the docks, the Carabineros (armed customs officers) sided with the rebels, while around 400 of their colleagues kept their heads down at their HQ on Carrer Sant Pau.

Similarly 1,960 Assault Guards stationed across the city, armed with 16 machine-guns and 8 light mortars, awaited clear, unequivocal instructions. Although several groups of Asaltos took the initiative and moved out to take control of important junctions.

At the airfield (now Prat de Llobregat/Josep Tarradellas international airport) most airforce personnel remained loyal to the Republic. They flew missions over the city to drop leaflets urging residents to resist the uprising. Later during the day a few planes supported attacks on rebel held positions.

Altogether about 5,000 disloyal troops were on the move.

The infantry column from Pedralbes seized the University of Barcelona. The regiment then spilt its forces, leaving around 100 men to defend the University and guard prisoners taken en route, while around 500 men continued along Ronda de la Universitat to seize what was then the grand Hotel Colón, the building overlooking Plaça Catalunya which now houses an Apple shop, a Desigual outlet, and the Canadian consulate. The rebels also took control of the Central Telephone Exchange, now the Telefónica building, and also, what was until recently, the Ritz Hotel on Gran Via.

Meanwhile, three squadrons of cavalry , en route to Plaça Catalunya via Carrer Còrsega, had been held up by armed workers and loyal Assault Guards at Cinc d'Ors (the junction of Avinguda Diagonal and Passeig de Gràcia). The battle lasted two hours until the rebel cavalry retreated to a Carmelite convent on Avinguda Diagonal, where they encountered a group of recently shaved Guardia Civil dressed in nuns' habits.

Another detachment of Santiago cavalry was ambushed as it advanced down  Passeig de Sant Joan toward Plaça de Tetuan. This encounter was the subject of a famous photo by Agustí Centelles. HERE.

Around the same time a squadron of the 10th (Montesa) Cavalry Regiment and a mixed group of army engineers and artillery entered Plaça de Espanya and tricked a platoon of loyal Assault Guards guarding the junction with cries of, "Visca la Repùblica! Visca Catalunya!" The artillery battery then began shelling barricades in Hostafrancs before training their guns on Hostafrancs Town Hall. The guns were soon encircled and later mobbed by outraged, unarmed civilians, supported by a few Asaltos.

On the outskirts of Barceloneta workers deployed huge rolls of newsprint to create mobile barricades to prevent the rebel artillery advance along Avinguda d'Icaria from their barracks in Poble Nou.

Major José López Amor, holed up in Hotel Colón, had intended to capture the Catalan government HQ on Plaça Jaume I before reporting to General Goded who was flying in from rebel held Mallorca. However, all his attempts to advance down the Rambles were thwarted by determined armed workers.

At 8am a column of the 7th Light Infantry was pinned down by a mixed group of armed civilians and Asaltos at the junction of Carrer Balmes and Avinguda Diagonal.

Another column of light infantry had been stopped at the junction of Carrer de Pau Claris and Gran Via.

At Arc de Triomf a company of infantry from the 34th (Alacántara) Regiment, en route to seize the radio station on Carrer Caspe, were pinned down by a local civilian defence group assisted by a few loyal Assault Guards.

Around 9am, local people, enraged that priests were using their church towers to fire on civilians fleeing the fighting, began setting churches alight.

By 10am scores of troops, realising they had been duped by their officers, had surrendered their arms and were fraternising with locals.

At 11am the Assault Guards were officially ordered to support local civilian defence groups. At the same time the rebel General Goded landed in a hydroplane in the port and made his way to the Military Government HQ near the Christopher Columbus monument.

By noon it became clear that the main concentrations of rebel forces were situated in Plaça Catalunya, Plaça de'Espanya and the Rambla Santa Monica—Ataranzas—Christopher Columbus monument—Military Government HQ area.

At 2pm the Guardia Civil finally decided to intervene on the side of local people and advanced on Plaça Catalunya.

By nightfall only the Atarazanas barracks at the bottom of Les Rambles, and the large Maestranza barracks in Sant Andreu, still held out.

The following morning, Monday, July 20th, it was all over.

Local people had crushed an army uprising. The long, bloody weekend had cost 511 lives; 300 civilians and 211 uniformed men; and 2000 people were seriously injured.

The Lepanto Barracks was renamed the Lenin Barracks and became the HQ for the POUM militia.

The Bruc Barracks in Pedralbes was renamed the Bakunin Barracks and became the HQ for the CNT/F.A.I. militia. 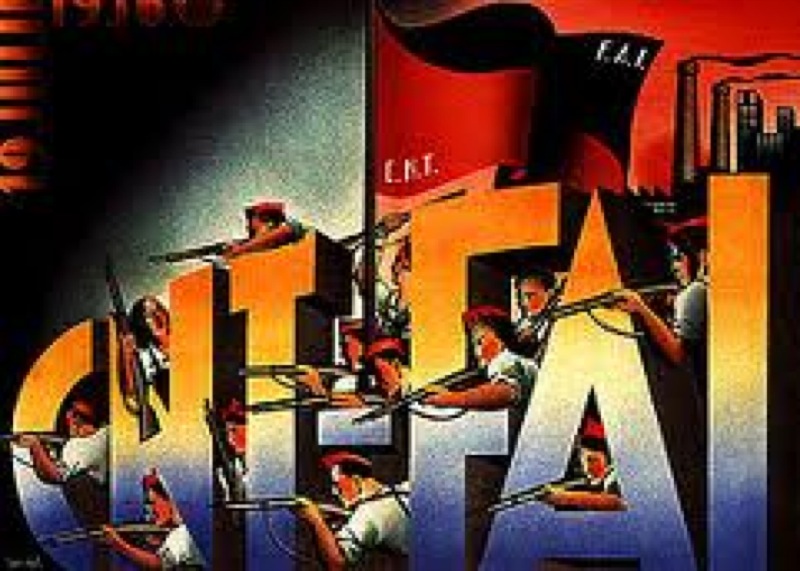 This failed army uprising against the elected government was to became known as the Spanish Civil War.