8.15am: We set off to Plaça de la Revolució de Septembre 1868 where we met up with Miquel and Silvia.

En route we caught a passing look of Carrer de Puigmarti, where a team of locals were still hard at it. 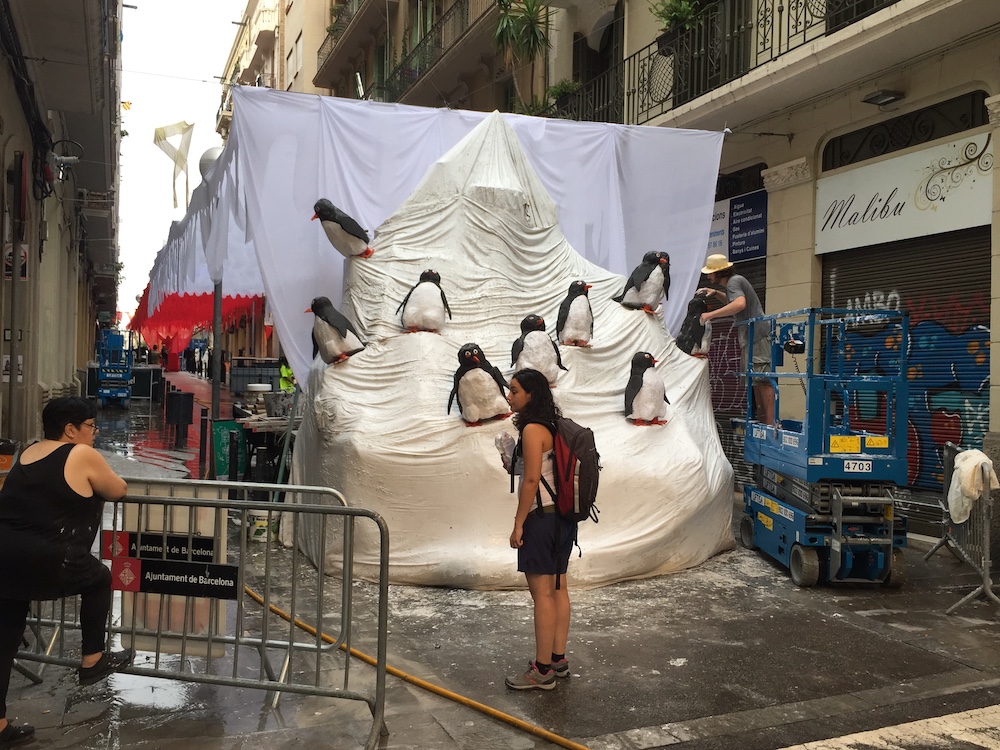 8:46am: and the Trabucaires fire the traca and prepare to fire their very loud guns to launch the parade…. and, a few seconds later I lost the sense of hearing in my right ear.

And then…we were joined by…the Lord of the Flies himself…Beelzebub.

The cardboard bin next to me caught fire. No biggie.

And on to Plaça del Sol…and a decorated balcony…

Then off to explore the streets… 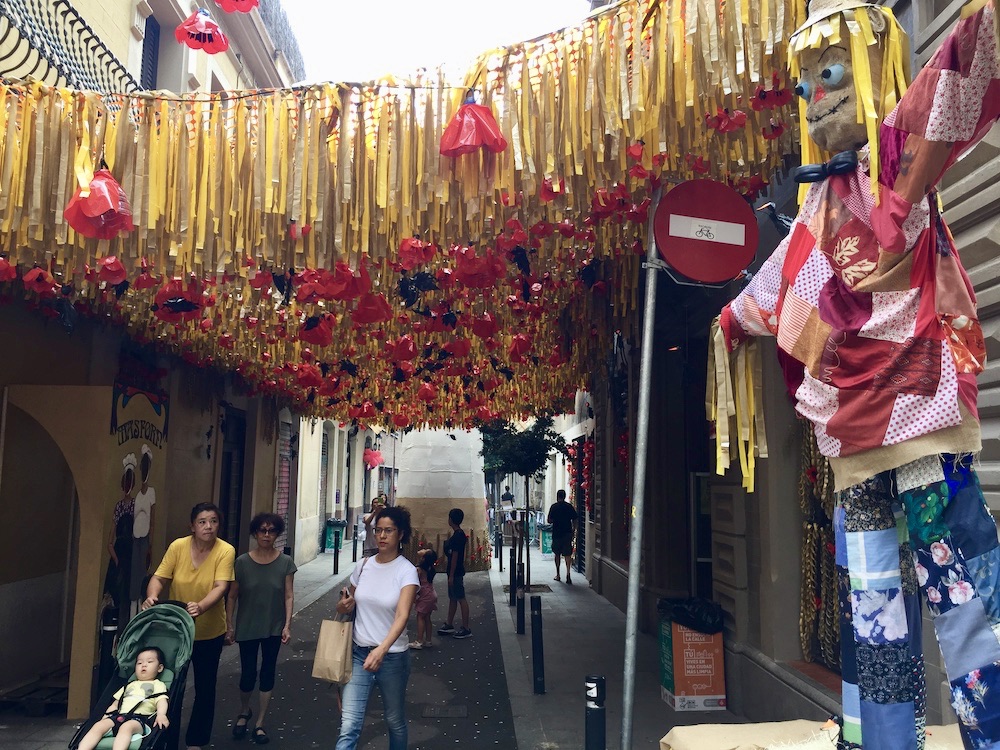 … before the hordes arrive…

…before resting a while for breakfast in Plaça de la Vila

And then we wended a roundabout route home, via Carrer de Llibertat…

10.30pm: We wandered out again, via Passeig de Sant Joan, Plaça Joanic and over to Carrer Verdi…I have never seen an entry line so long… so we headed up to the exit…

Then we headed over to Plaça de Rovira i Trias via a packed, and lively Carrer de Providencia… 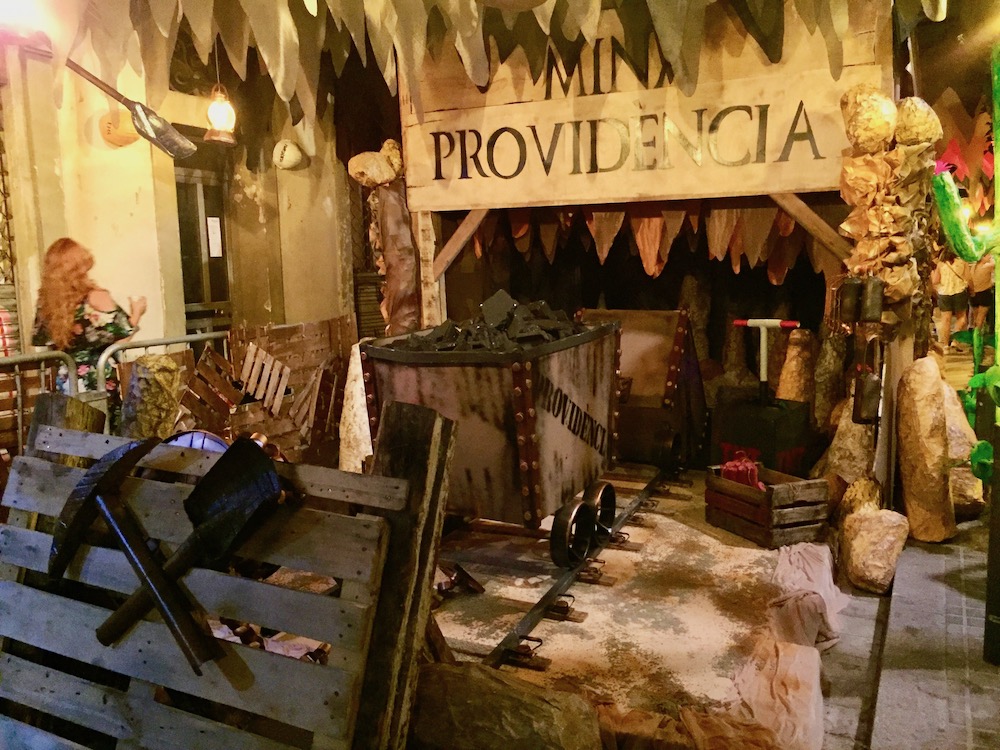 We hung out a short while in Plaça Rovira i Trias, surrounded by eerie birds, before heading over to Plaça del Nord…and the most pleasant surprise of the evening.

Every year during the festes there's always a stand out band, a band which pumps out party pleasing music and gets the crowd singing along.

The rumba band, Alma de Boquerón (Soul of Anchovy), a tight and polished 7-piece ensemble, knocked out a string of irresistible tunes before segueing into a rip-roaring version of Dick Dale's classic, Miserlou, and, then, without dropping a beat, segueing unexpectedly into a thunderous version of Pink Floyd's Another Brick in the Wall. A rumba band playing Pink Floyd? You bet. Brilliant. And then they teased us all with the opening bars of Led Zeppelin's, Stairway to Heaven, before reverting to lively, witty, tongue in cheek contemporary rumba.

HERE's a LINK to their official website, where you'll find a sample compilation of tunes:HERE.

Enjoy! They are playing four more gigs during the festes.

If you get chance do try and catch them in action.

After the gig we trekked back down and along Carrer Verdi, where it was still rammed, before heading to Raïm for a mojito, and then down along Carrer Progrés, Carrer Perill and home for around 3am. Another great day in the barri.

Day 2, 10:30pm: After yesterday's exertions we planned to spend most of our time on one street, Joan Blanques, split into two decorated sections and with two stages featuring two very different crowd pleasing bands: A Contrablues and Dani Nel·lo's Jazz Savages. 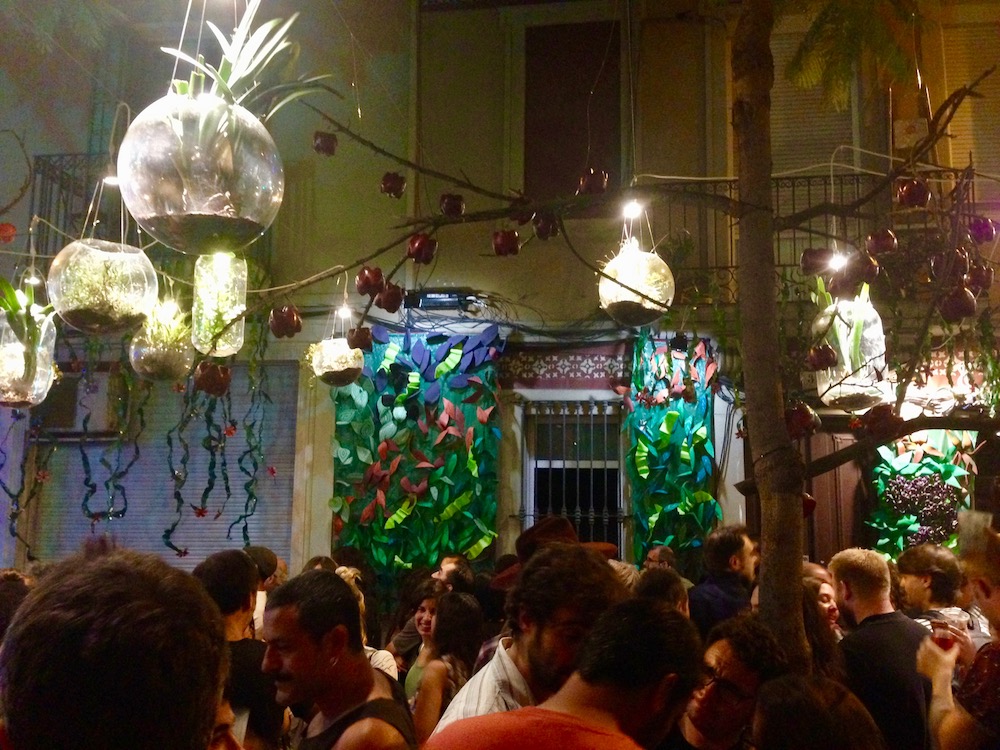 11pm: We found two chairs and a table and installed ourselves on Joan Blanques de Baix. 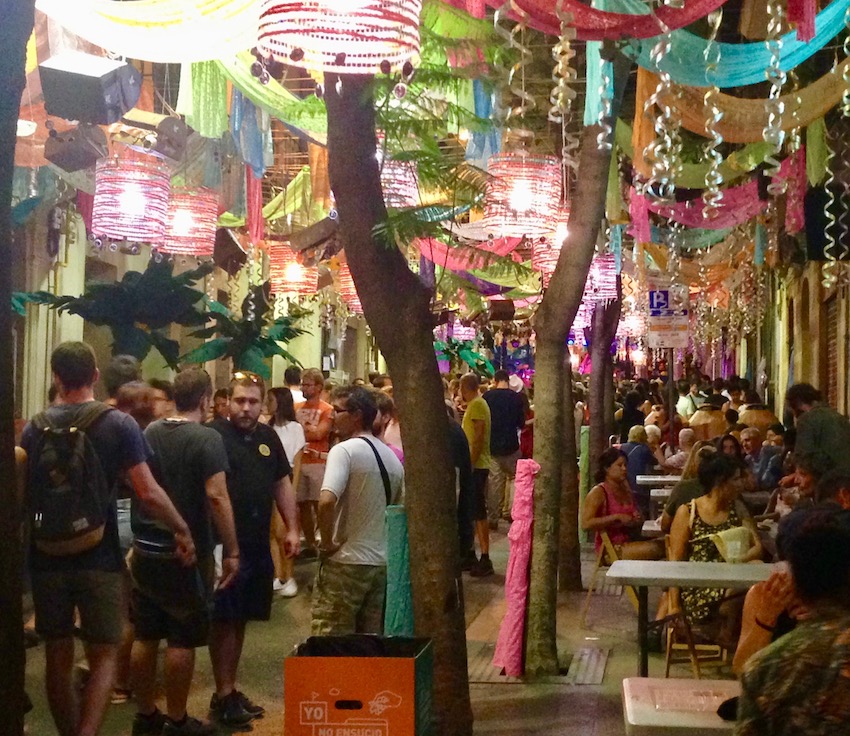 1am: Having decided we all needed a halfway decent mojito the four of us wended a way through the streets to Raïm. I ordered a mojito made with an oscuro (dark rum) the Nicaraguan, 7 year-old Flor de Caña. 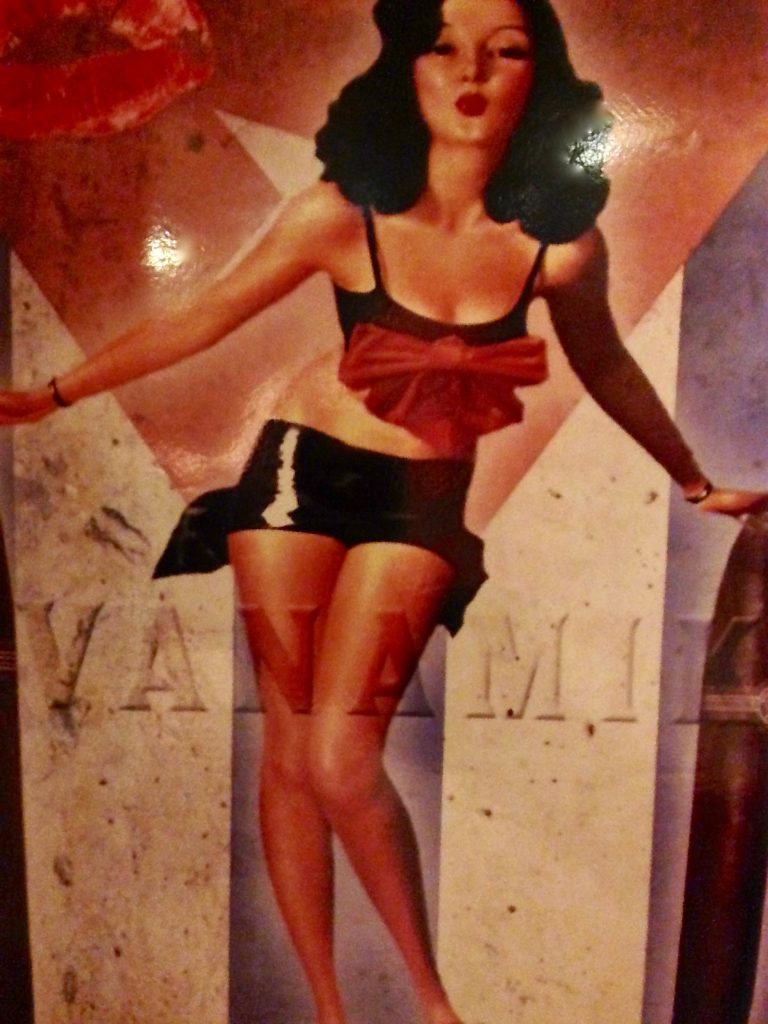 Advertising poster for cigars in Raïm

2:30am ish: Having joshed and chatted with the Italian chef from a well-known and popular (or, should that be 'polpolar'?) Gallego restaurant, we left Raïm and headed down Carrer Progrés… 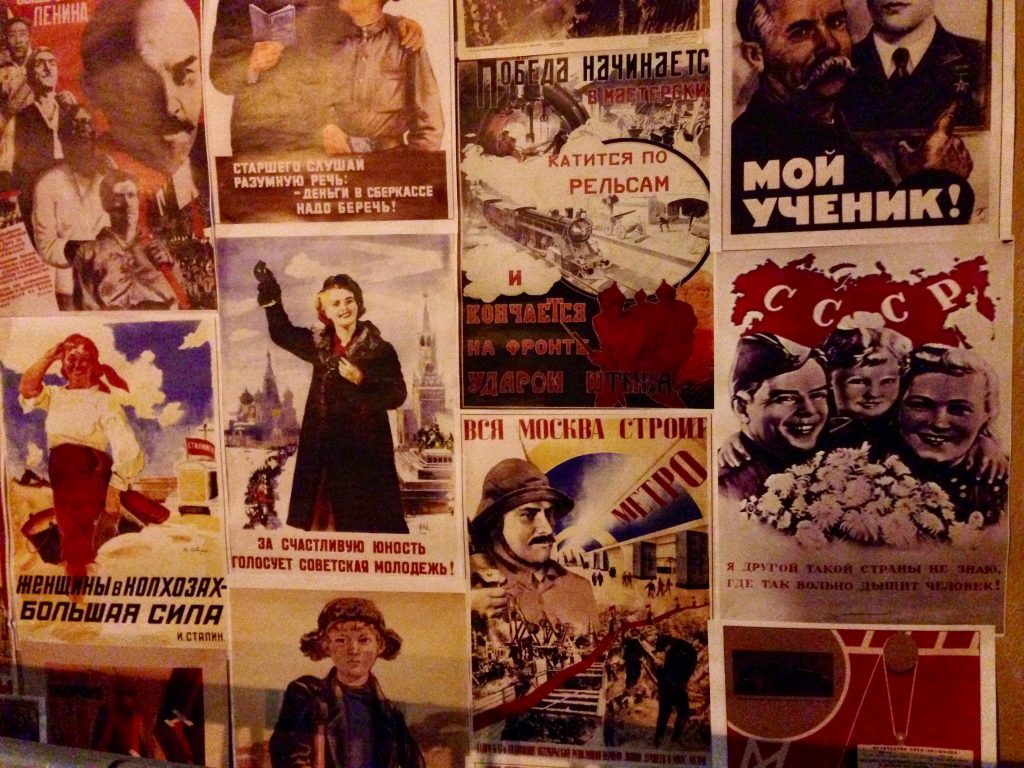 Collage of posters from USSR on Carrer Progrés

…and a huge statue of Lenin…. 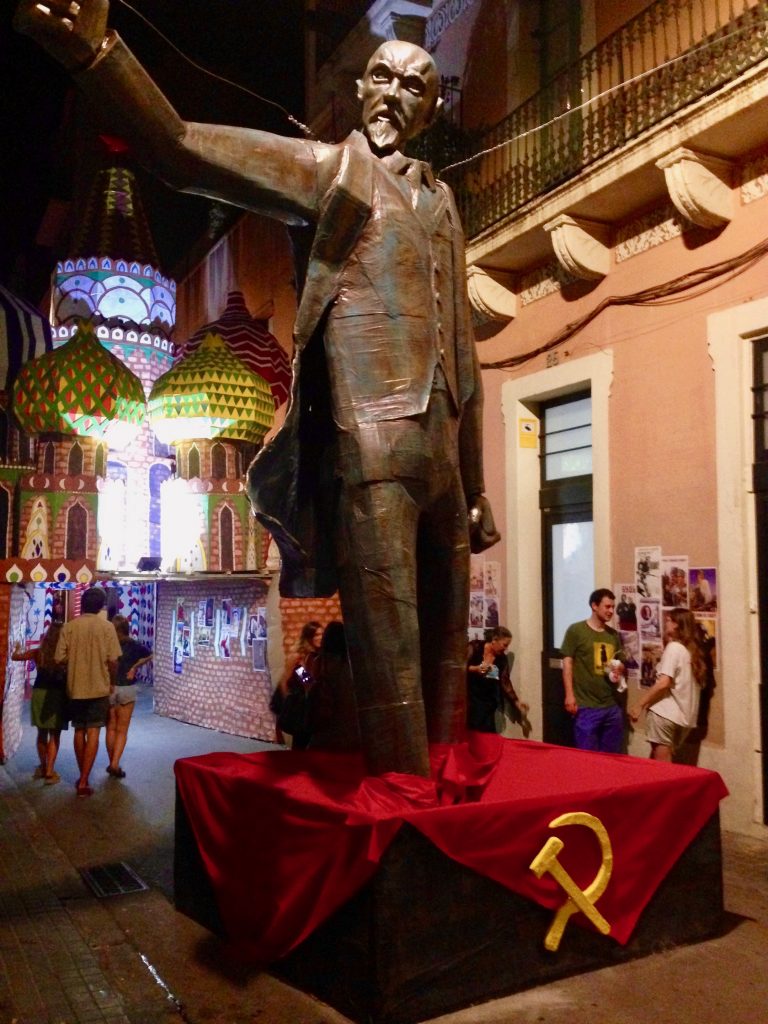 …where we encountered a handsome looking bloke wearing an Augusto Sandino t-shirt chatting with his poet girlfriend. 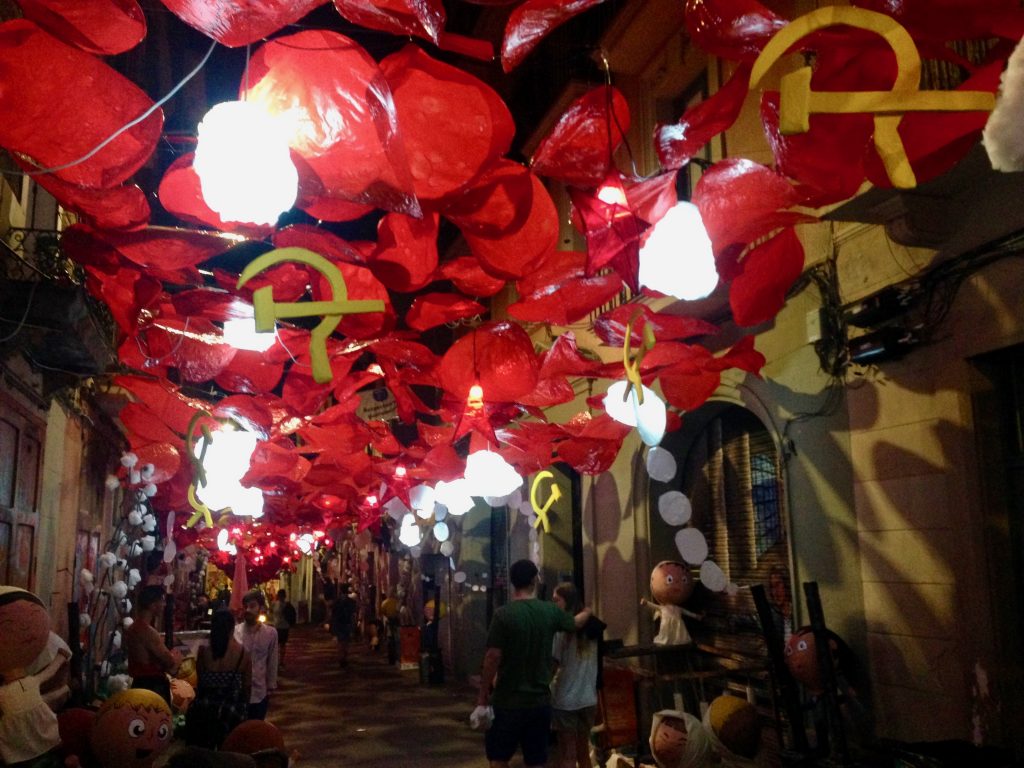 And then to Carrer de Llibertat… 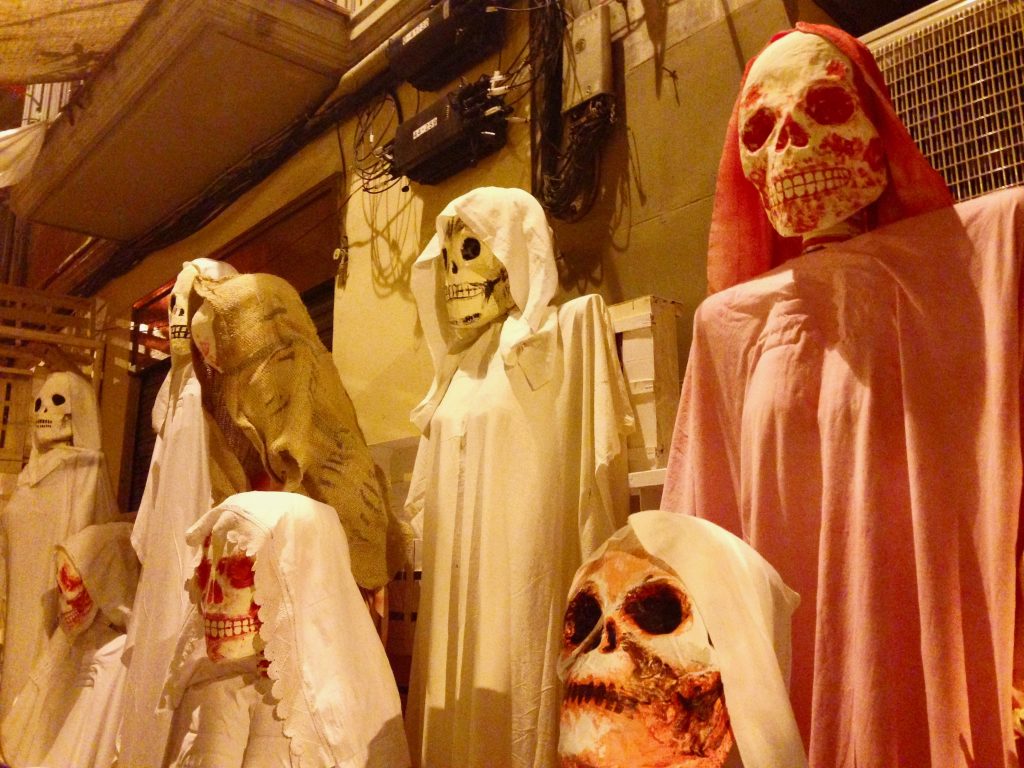 5am: We finally called it a night and headed for bed.

8am: A group of eight of us assemble for coffee and pastries at La Corrala before setting off to Plaça de la Revolució de Septembre 1868 to catch the start of the parade which announces the start of the festes. 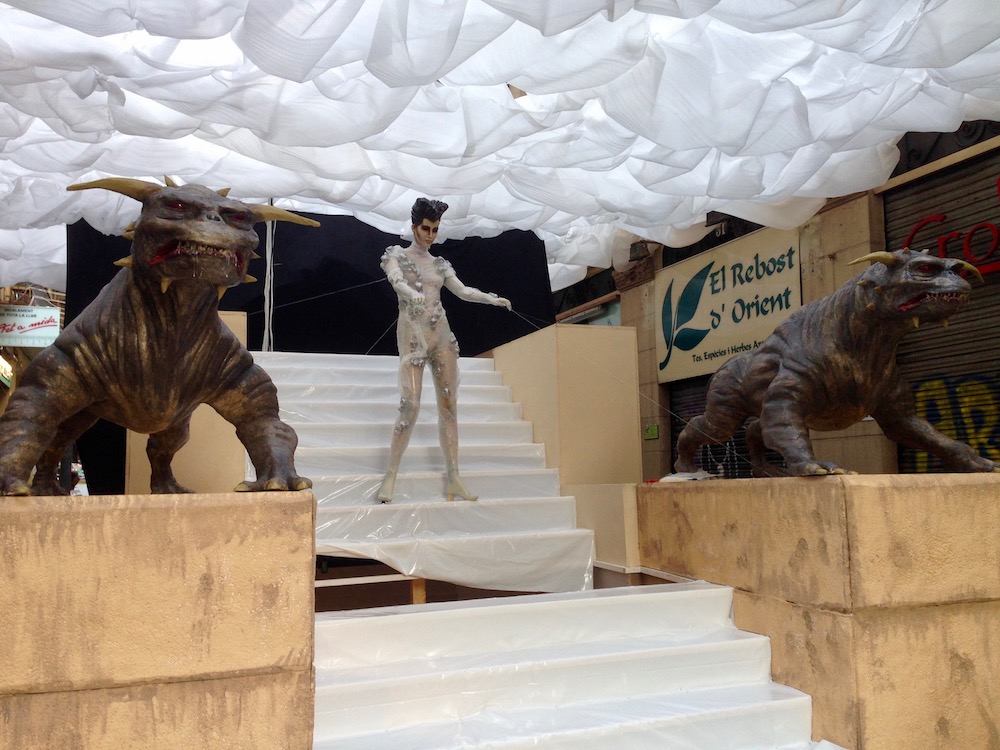 8:38am: and the Trabucaires prepare to fire their very loud guns to launch the parade….

And, so to Plaça de la Vila — now transforned as The Little Prince square…

While the morning correfoc reached a climax… 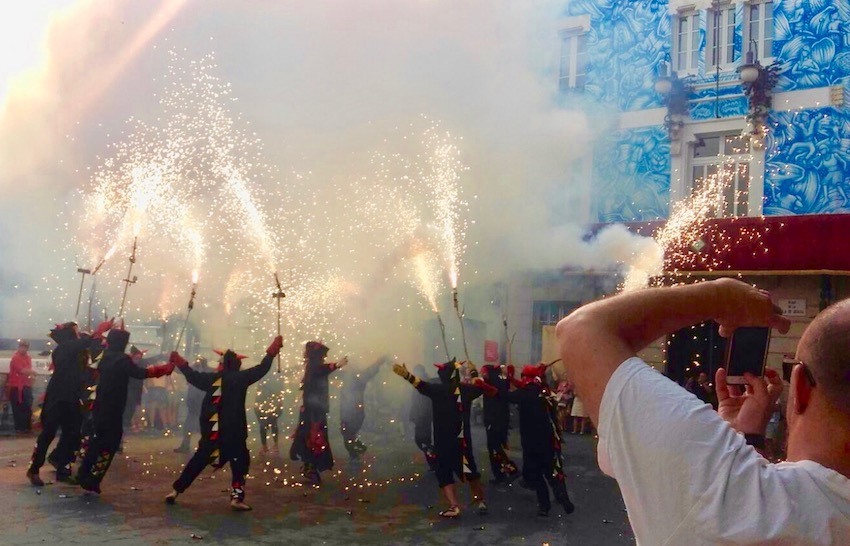 Then off to explore the streets… 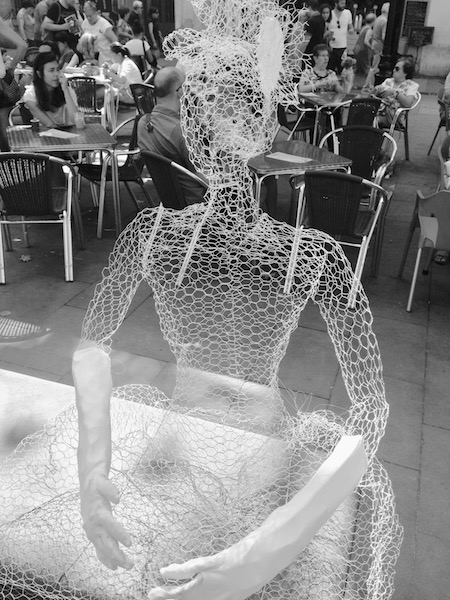 … picking up a few stragglers along the way. Now we were 10. 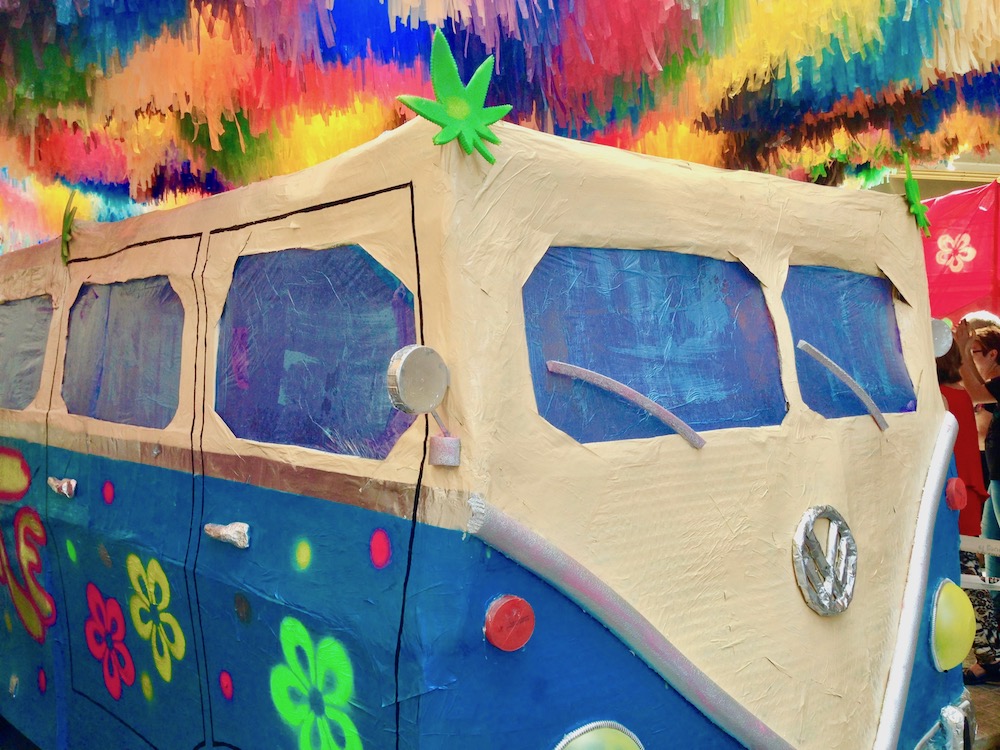 But, before Carrer Verdi we lost two fainthearts. We were again 8. 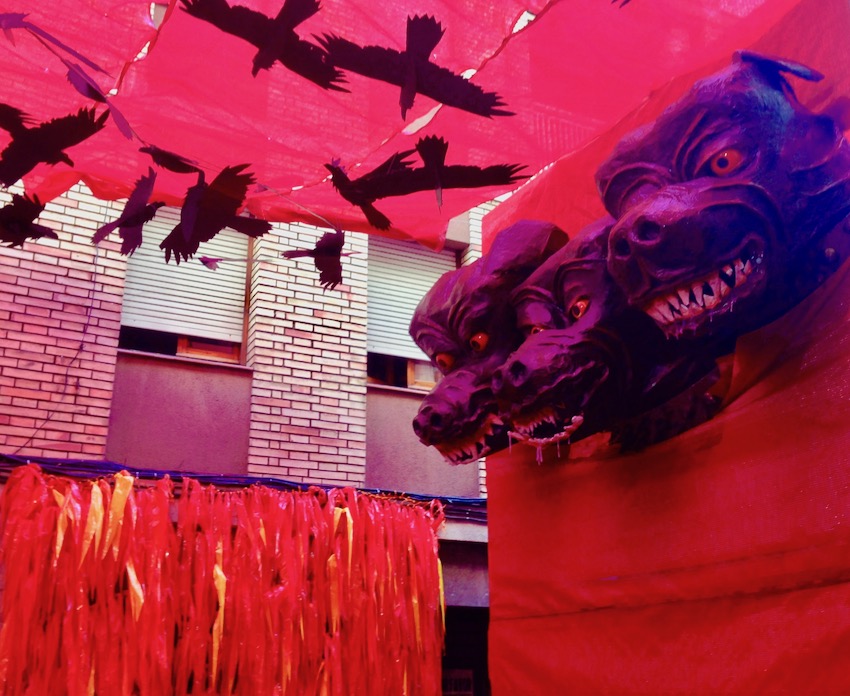 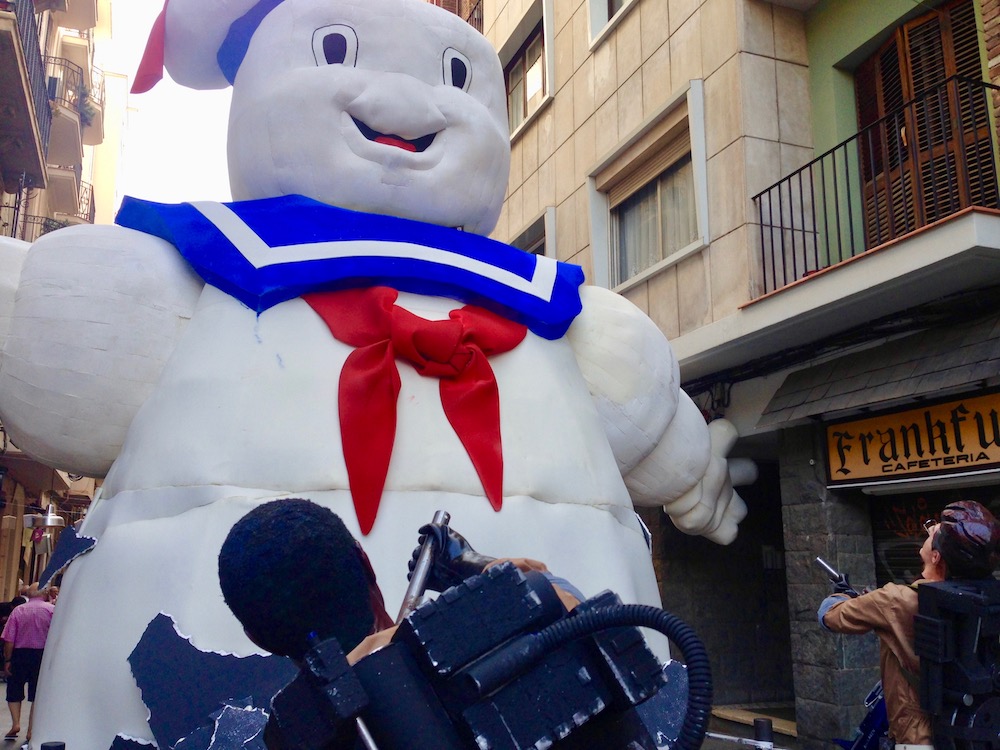 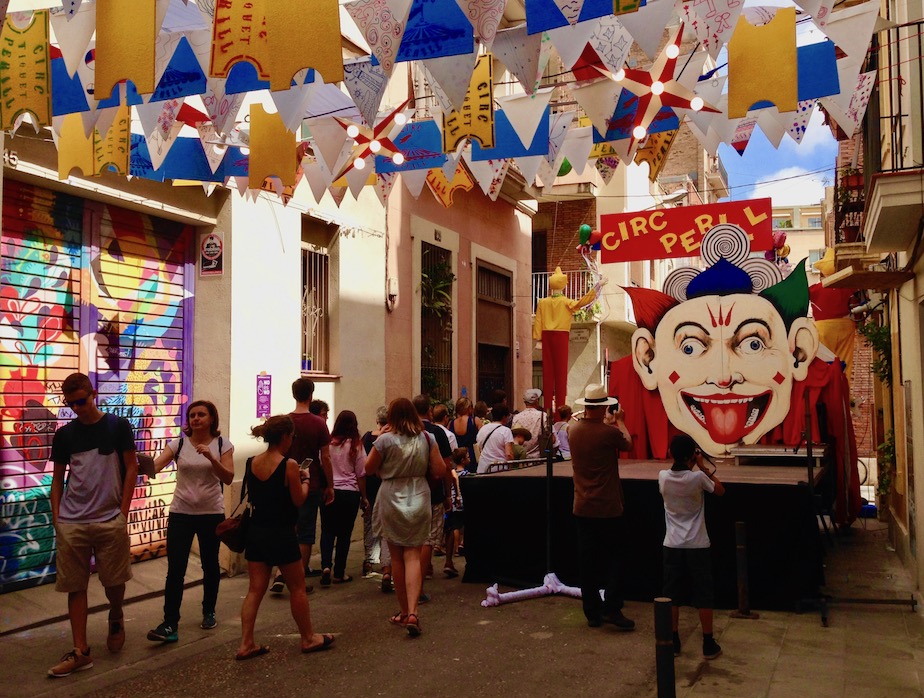 …and a bar on Bailén before getting home for a shower, lunch and a nap.

6pm: And, four of us strolled out again to watch the cercavila. 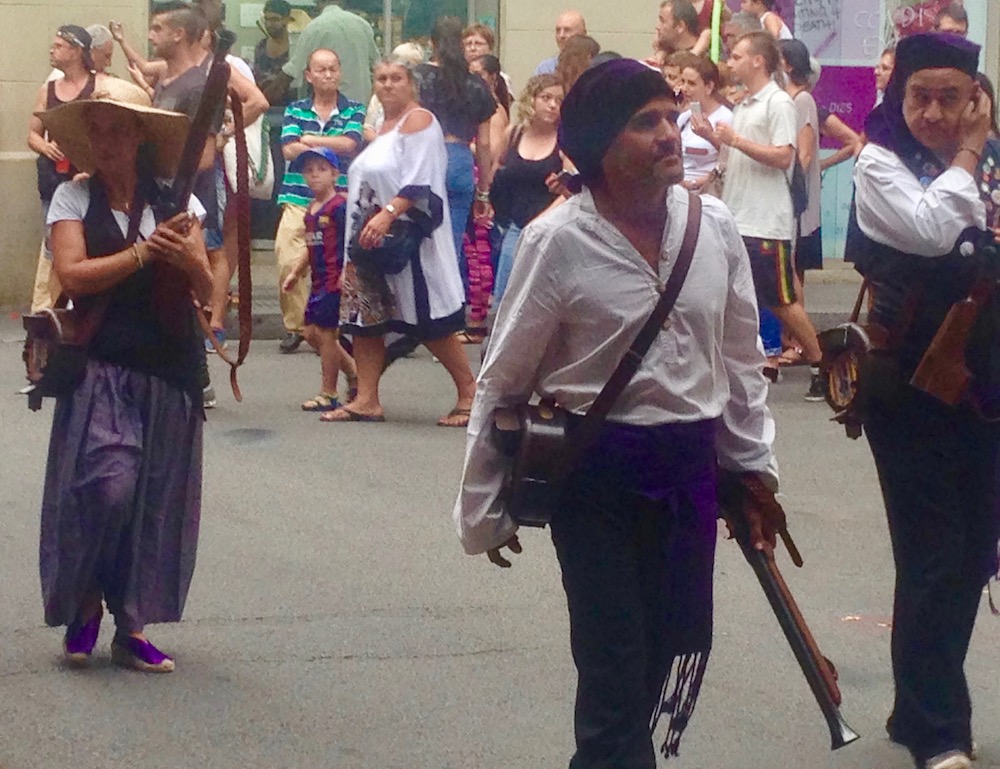 And here comes the T-shirt man… 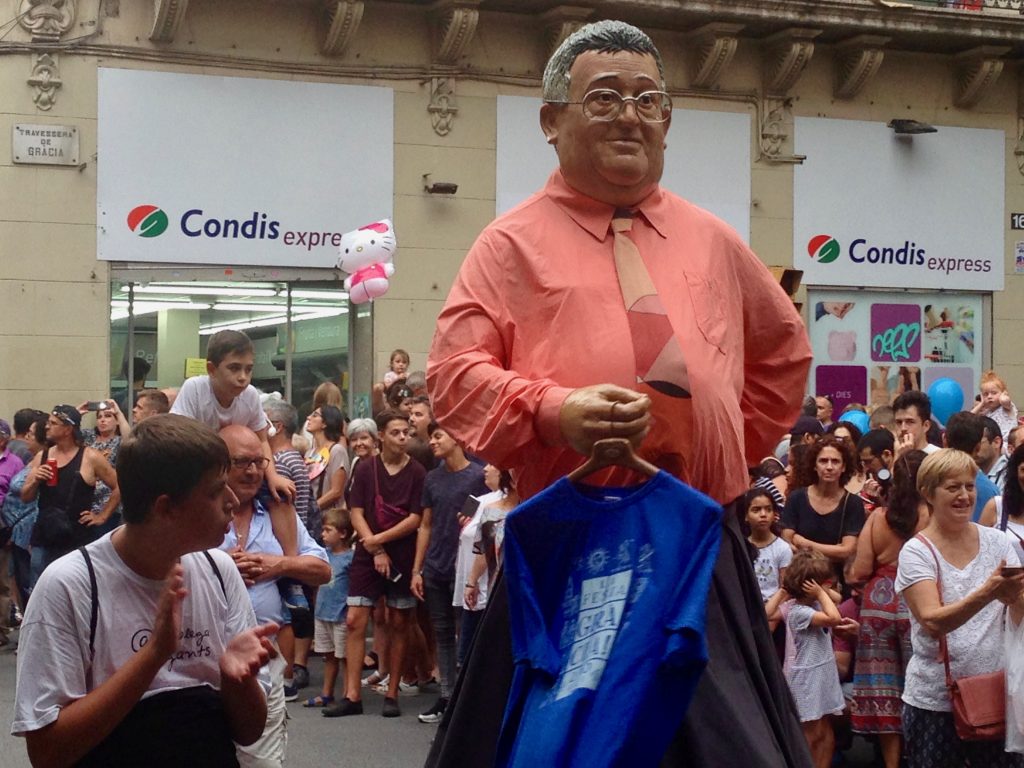 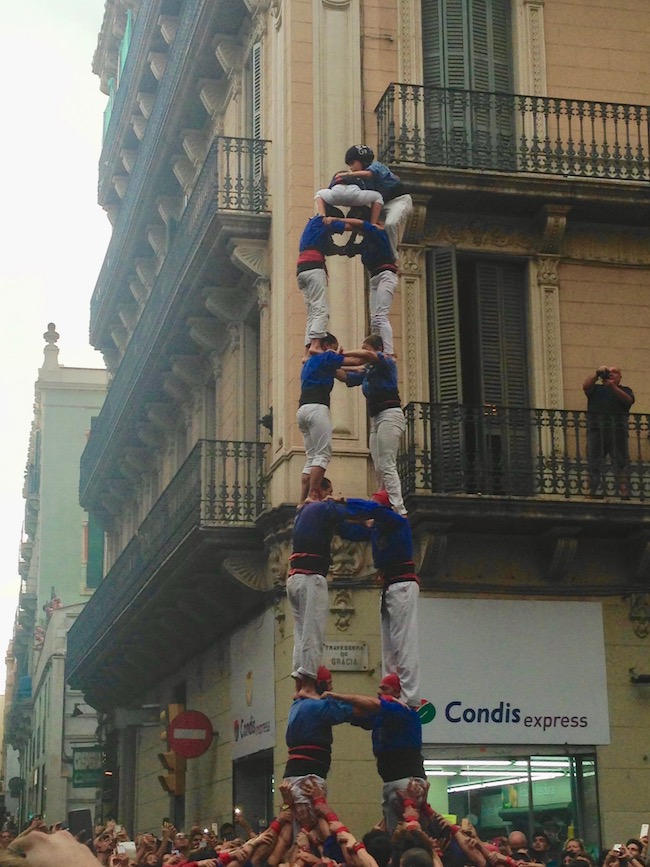 11pm: And, so, after mazing and grazing around, and after choripans and empanadas at Plaça Joanic, the four of us ended up on Passeig Sant Joan to see A Contrablues and meet a few friends.

From the very first vibrato chords the band had all assembled in the palms of their sticky hands. A brilliant band who never fail to deliver. 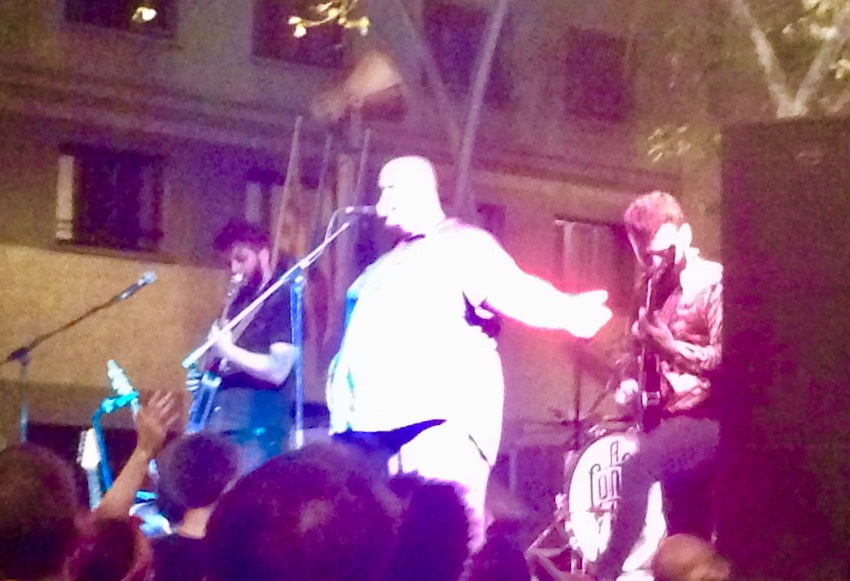 All in all a great day out in the 'hood. 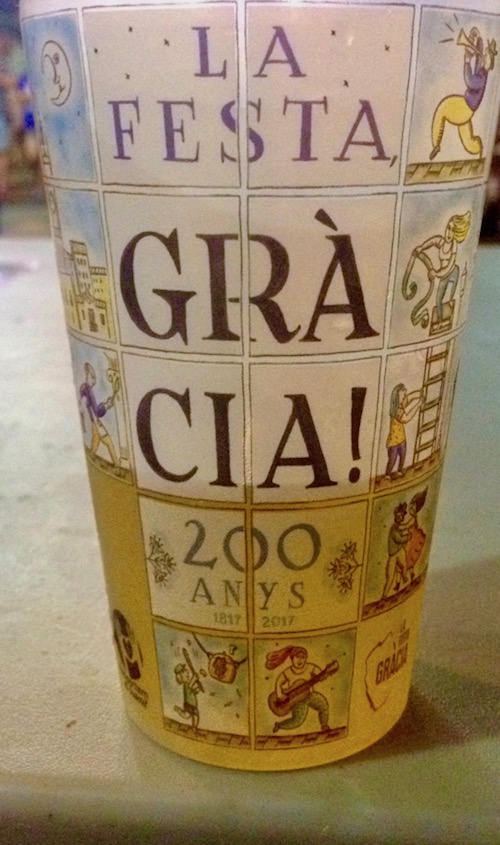 Time to start the party!

Hot as hell and raining fire in Barcelona

One of the many wonderful things about exploring Barcelona is turning a corner and happening across curious festivities in unexpected places.

You never quite know… you may meet the Devil.

They told you, “The Devil has no friends…” They were lying.

He also has pets…

And a friend who wears shades…