How to use the T-Casual travel ticket in Barcelona

IMPORTANT: As of January 1, 2020 the T-10 travel ticket was replaced with the T-Casual ticket.

Although a few terms and conditions of use have changed, the basics of purchasing and using a T-Casual ticket are unchanged.

Update: January 6: There is some measure of confusion regarding the unipersonal/multi-personal status of the new T-Casual ticket. Because of public dissatisfaction the T-Casual ticket CAN now be used as a multi-personal ticket until February 29th, 2020 — after which date, and the introduction of the T-Familiar on March 1st, it will revert to being unipersonal.

The T-Casual is unipersonal* — and can only be used by one person *BUT SEE JANUARY 6 UPDATE ABOVE.

The T-Casual is good for 10 rides using a combination of up to 3 modes of transport.

Locals were not slow or shy about expressing their disappointment and ire at the decision to get rid of the mighty T-10.

Campaigners obliged City Hall and the ATM (the entity which co-ordinates public transport ticketing) to revise their plans. To soften local and international criticism the ATM intends to launch a wholly new ticket on March 1st this year.

So, for most visitors the T-Familiar, when available, will be the way to go. However, from January through to the end of February I advise visitors to use the T-Casual. Unless you are planning on staying for a month, in which case you may want to consider buying a T-Usual ticket.

ATM TMB SNAFU - A tuppence worth

The introduction of the new travel cards has been an unnecessary, expensive and stressful Public Relations and Internal Communications disaster.

The ATM (the integrated transport co-ordinating entity) have flipped and flopped, changing the conditions of use of the new T-Casual three times since its introduction just six days ago. And, in cowardly fashion, have blamed technical glitches rather than public pressure for the on-the hoof changes.

For need of accurate and clear information locals and visitors have been left perplexed. How city tourist information staff dealt with this episode I've no idea (yet) — but I wouldn't have wanted to be in their shoes during this period.

It's all so unnecessary.

Why the changes now?

Well, in theory, the ATM will be introducing a new ticketing system in January 2021 — the T-Mobilitat.

The T-Mobilitat will feature a plastic travel ticket which can be topped up — akin to the Oyster card in London. Its introduction has been delayed by more than a year. However, instead of sticking with what works, and what locals and visitors understand and appreciate, the ATM panicked and decided to launch a range of new tickets, including the T-Casual, the T-Usual and the T-Familiar, to cover the period until the T-Mobilitat's introduction.

The whole fiasco speaks of dim, closed management thinking and inept political dabbling — which no-one wanted or voted  for.

One of the many wonderful aspects of life in Barcelona is the public transport network.

If visiting from the United States or the UK you’ll be pleasantly surprised by how clean, comfortable, convenient and reliable the local transport network is.

The quantity and quality of passenger information, in Spanish, Catalan and English (and some French) is very good.

The best way to get around the city is to use public transport.

One of the first things to do after arriving in the city is to buy a T-Casual integrated transport ticket — it will save you a ton of money and a lot of hassle.

IMPORTANT: You will need to buy a T-Casual for every member of your group — you cannot share* a T-Casual. *BUT SEE UPDATE JANUARY 6 ABOVE.

I will use a T-Casual at least twice, sometimes five or six times every day during the working week. It really is quite simple, however, I can understand how visitors from an area without an integrated transport system could feel a little daunted by the process.
So, here's your guide to using the T-Casual. 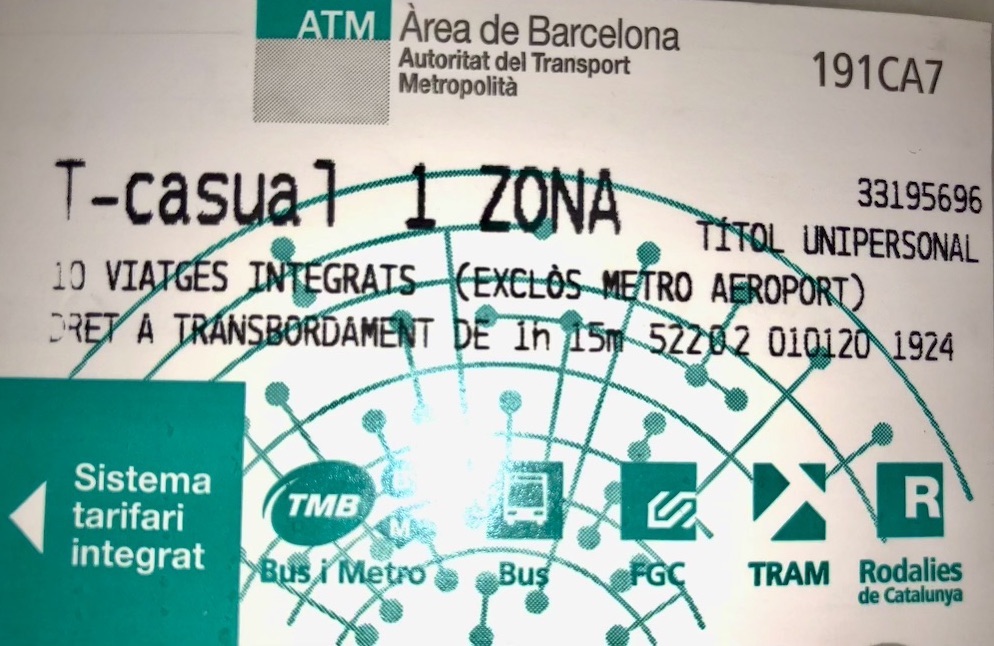 How to use the T-Casual on the Metro (subway), local trains (RENFE Rodalies/Cercanias and FGC) and Funiculars:

There are not many staffed ticket offices where you can buy a ticket, and if you haven't already purchased your T-Casual at a tobacconists, newsagent or street news kiosk (some bakeries and other shops also sell T-Casuals) you will have to use a machine in a Metro station or at a Tram stop these machines will be marked with the TMB logo (as in the photos below).

You can also buy your T-Casual ticket online. To do so you'll first have to register with JoTMBé, a loyalty scheme which offers points and prizes for purchasing tickets online and via the TMB app. If interested you can read more detail HERE and HERE.

There are also a few ticket machines near bus stops on Avinguda Diagonal, however, these machines only accept credit/debit cards, and are so few and far between, and so often out of service, that they are not worth your time looking for.

How to use a ticket machine

These three images illustrate the above: 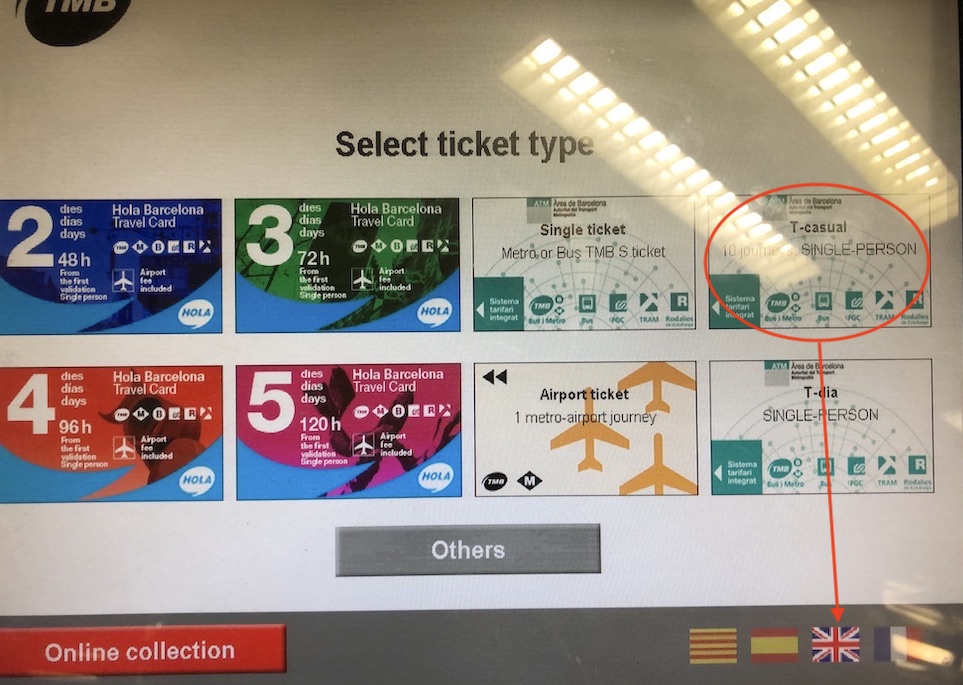 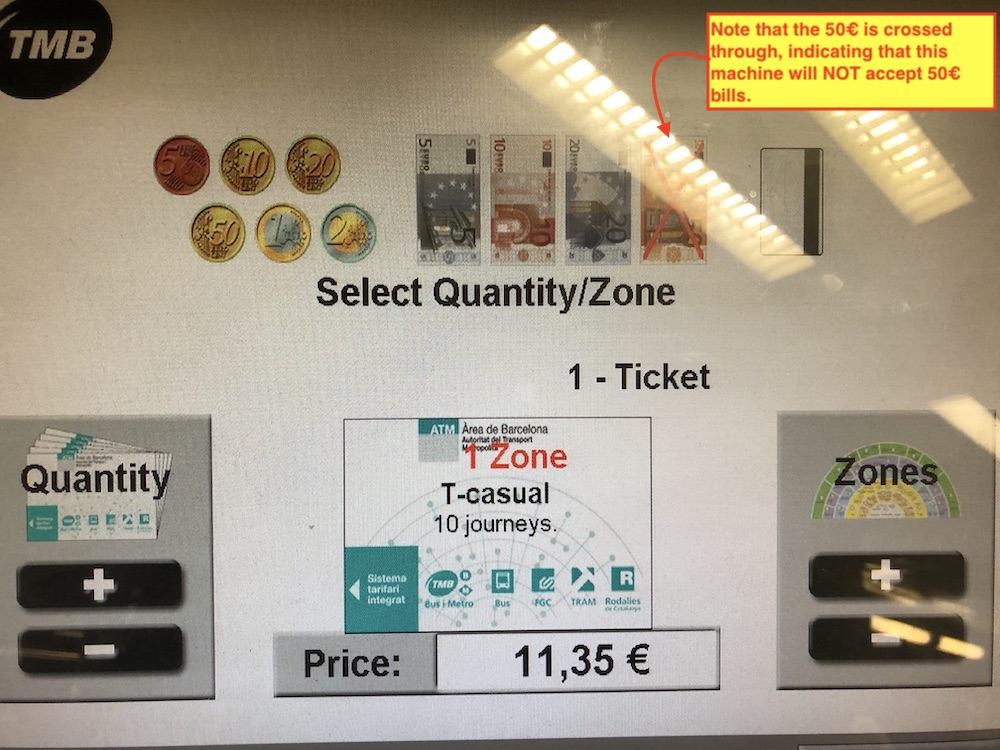 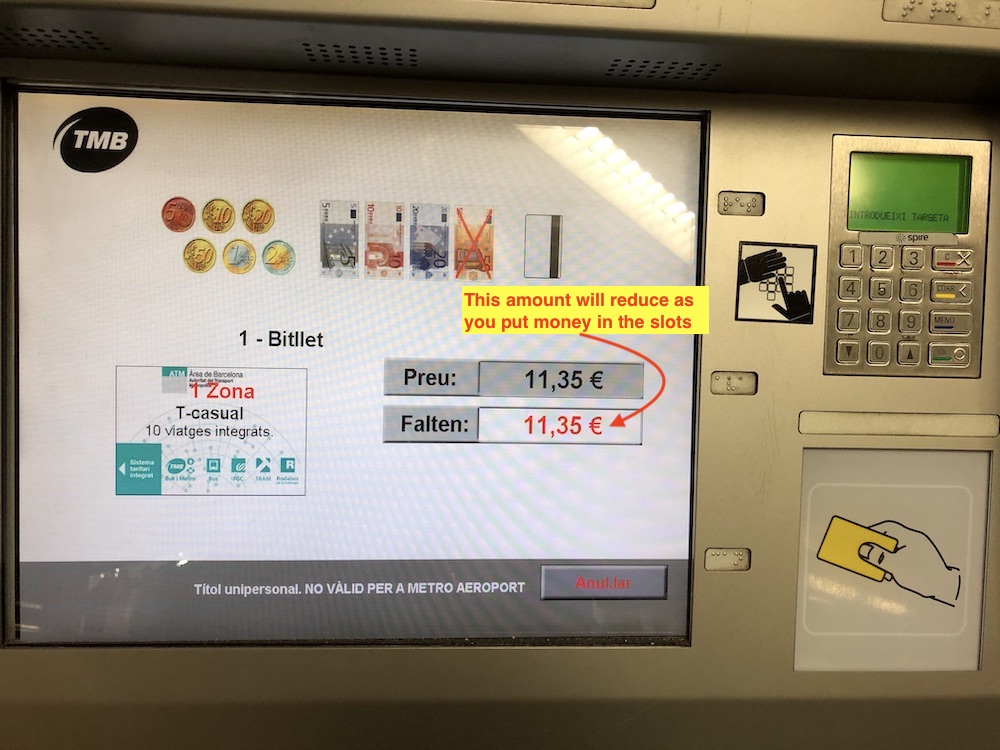 Apologies for the quality of the images — will try and replace them at some point in the near future.

Insert coins in the vertical slot above the screen, or insert a note (bill) up to the value of 20€ in the horizontal slot to the right of the screen, or if buying more than two T-Casual tickets, multiple notes/bills. (Please note: As at writing many machines do not accept 50€ notes/bills).

The most frequent cause of first-time users' frustration is incorrectly inserting notes/bills. 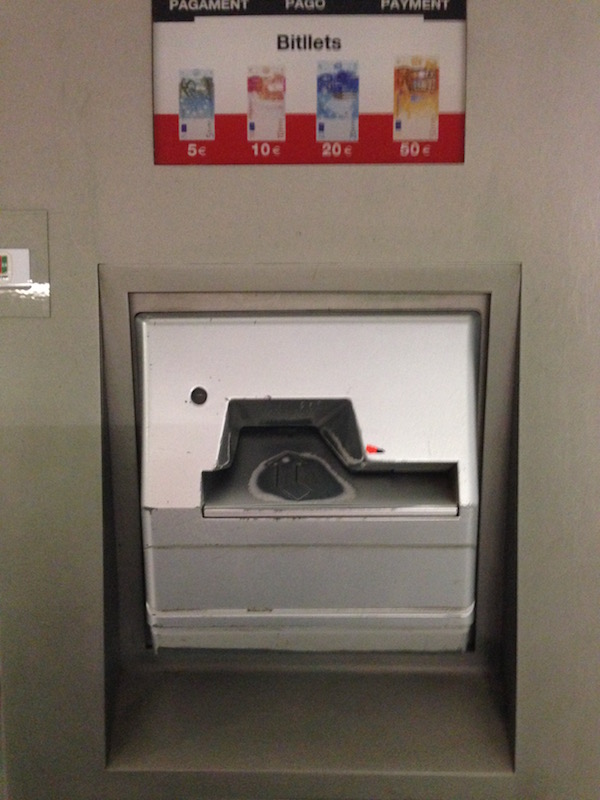 When inserting notes/bills be careful to place the note the correct way up as shown in the graphic above the slot. PLEASE NOTE: The 50€ note shown above and below is NOT crossed through with a red X — so it will accept 50€ bills. 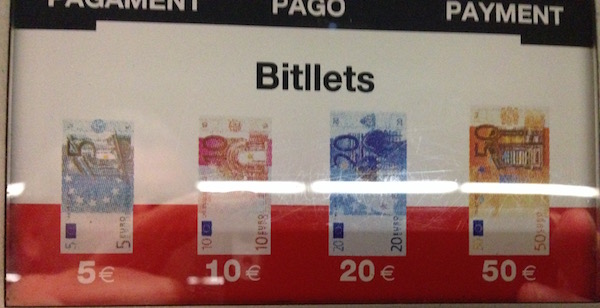 The machine will issue change and deposit your ticket in the tray below the screen. You’re good to go.

IMPORTANT: Remember to remove your card. The machine does not emit any audible warning, as do ATMs, if you leave the card in the slot. If you do inadvertently leave your card in the machine then after 30 seconds or so the machine will swallow your card. If this happens the only way to retrieve your card is to go to the TMB customer services office in Diagonal metro station the following day. Station staff do not have any way of opening the machines  they can only be opened by cash collection staff.

There are 3 types of ticket barriers: 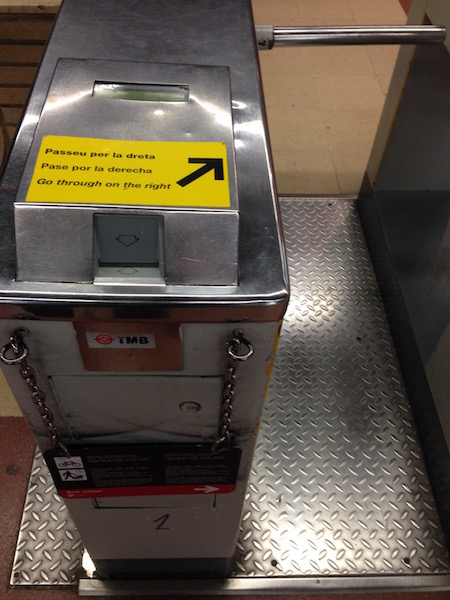 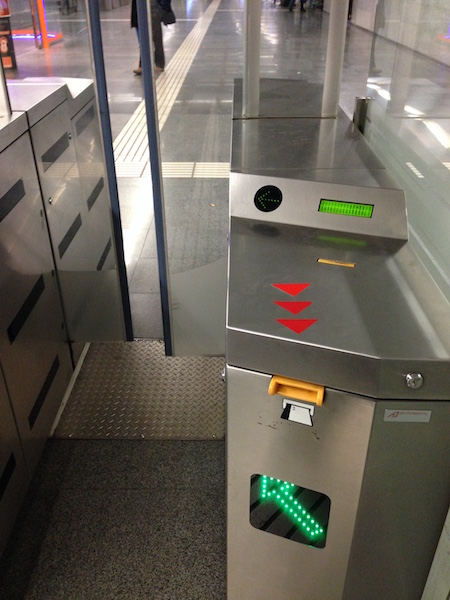 You’re on your way — now go find your platform/track.

How to use the T-Casual on the bus network:

[Remember the T-Casual is a unipersonal ticket. So, if you have no rides left on your T-Casual you will NOT be able to borrow a ride from someone else's ticket* — (as you could with the T-10 ticket ) — you will be obliged to buy a single ticket for 2,40€.*BUT SEE UPDATE JANUARY 6 ABOVE.

Here’s a photo of a ticket machine on a bus:

How to use the T-Casual on a tram: 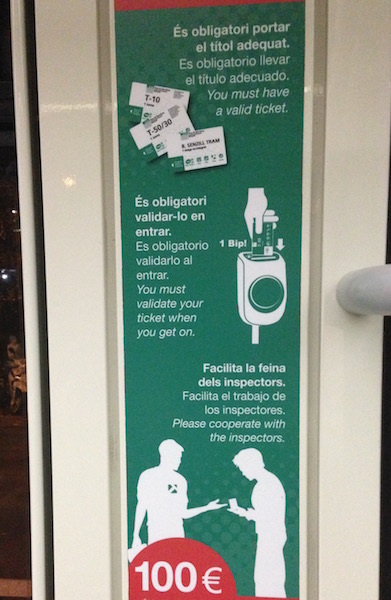 Transfers and duration of travel:

You can use your T-Casual to switch between three modes of transport on your route for up to 1 hour and 15 minutes in Zone 1 and it counts as a single journey/ride.

For example, you could take a barrio bus (local public mini-bus) to connect with a regular bus to connect with the metro, or take a tram which connects with a local train which connects with a funicular. If you do all that in one hour and fifteen minutes from the start of your journey it only debits your ticket by one journey. However, note that once you leave the metro system you will have to use another ride when re-entering the metro.

IMPORTANT: Keep your ticket flat. If the ticket gets bent or torn then it will likely not work. You can take your damaged ticket to a TMB Customer Services office (in Diagonal, La Sagrera and Universitat metro stations) and they will issue you with another ticket. You could also ask at an office in a metro station  if you’re patient and polite the staff can, although they are not obliged to, issue you with a new ticket credited with the correct number of journeys.

Enjoy getting around Barcelona with your T-Casual.