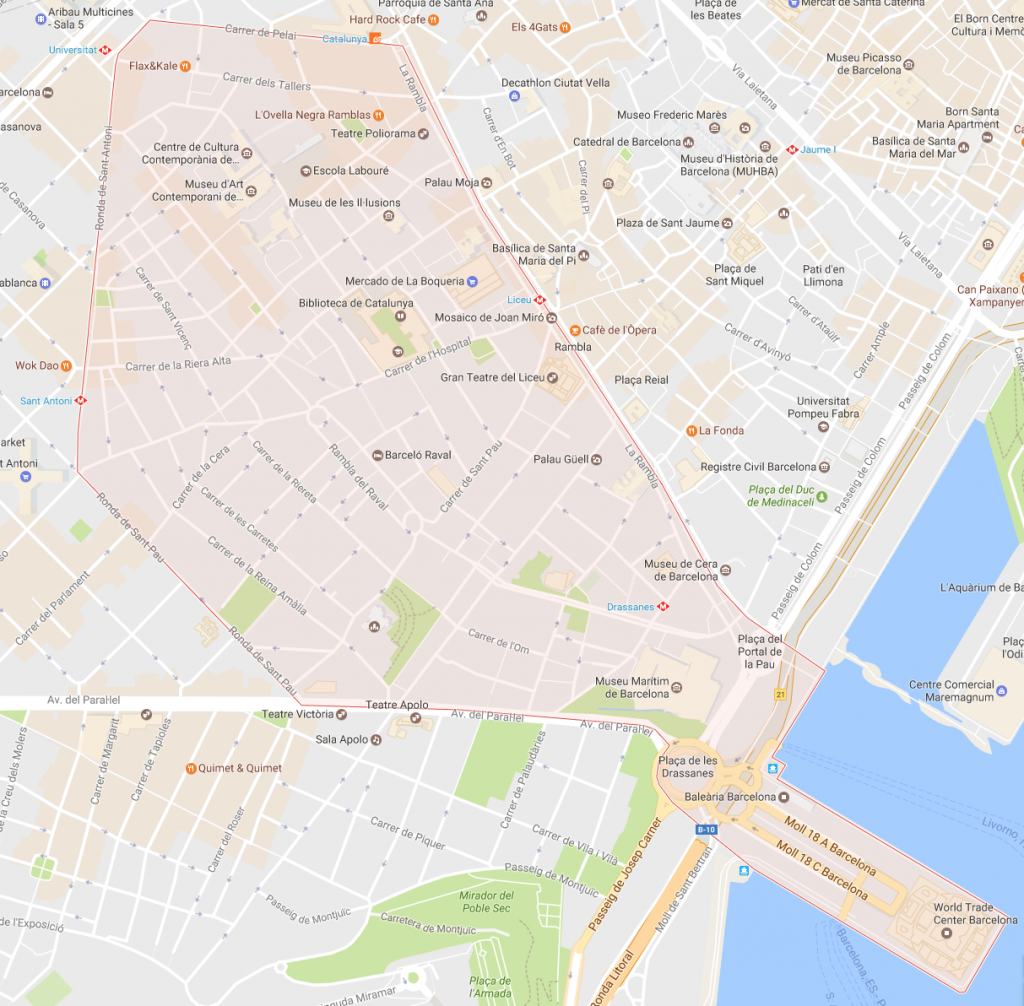 Situated between Les Rambles and Paral·lel, Ronda de Sant Pau/Ronda de Sant Antoni, El Raval is a lively, colourful, ethnically diverse neighbourhood which embraces the old and the new — hosting a thousand year old monastery, a contemporary art museum, the national film theatre, one of the largest opera houses in Europe, as well as the Boqueria, one of the world’s most famous food markets.

The Raval is the area which, more than any other, defines Barcelona as a multi-cultural, multi-generational city — 51% of registered residents were born outside of Spain.

Until the mid 14th century the area was a market garden outwith the city’s walls, supplying the city’s residents with fresh produce.

In 1357 King Peter IV extended the city walls to embrace the area and protect the city’s food supply from attack. His edict also brought the Monestir de Sant Pau del Camp — the Monastery of Saint Paul of the Fields, established in 911AD, into the city. These ‘new’ city walls ran along what are now the streets of Ronda Sant Antoni, Ronda de Sant Pau and the lower part of Paral·lel, including the Royal Dockyards of Drassanes, established by Peter the Great in 1285.

From the mid-19th century the area was urbanized to house workers pouring into the city to work in local factories. As wealthy families moved out to establish new family homes in La Bonanova, property sharks moved in to remodel once fashionable town houses into over-priced doss houses (flophouses).

Overcrowding, insanitary conditions, outbreaks of typhoid and cholera, poor nutrition, and ruthless employment practices combined to foment popular dissent. Life expectancy of an industrial worker at this time was a mere 23 years. Pause a while and take that in — a life-expectancy of 23 years.

During the early years of the 20th century, given its proximity to the Port and Dockyard, and the music halls, cabaret clubs and theatres on and around Paral·lel, the area became notorious as the epicentre of the city’s sex trade — a reputation which still persists.

The neighourhood has only been referred to as 'El Raval' since around 1990 — before then it was known as barri  xinès (català) or barrio chino (castellà) — Chinese Quarter. [Go HERE to read a brief New York Times account of the change of name]. Part of the neighbourhood's makeover involved linguistic and terminological acrobatics to claim an unverified Arabic ancestry for this part of the city.

Today the neighbourhood is home to several of the city’s most notable cultural facilities, such as MACBA — the contemporary art museum; CCCB — a centre for contemporary culture; Filmoteca — the national film theatre; the often overlooked Arts Santa Mònica, as well as the Liceu opera house and the Palau de la Virreina.

There's a lot to see and experience here— you could easily spend a whole week and more gawking around​ and not get its measure. For example, one of the oldest surgical theatres in the world, Sala Gimbernat, is here in the Antic Hospital de la Santa Creu. The former hospital complex is now home to the National Library.

Gaudí has a presence here too with his Palau Güell on Carrer Nou de la Rambla [SEE: featured photo].

And, the Sant Pau Monastery features a beautiful cloister — worth a visit if you have time.

I used to visit the Raval a lot. A friend lives in the flat where the writer, Manuel Montalbán was born. Another good friend used to work at the University here and we'd often meet up after work. My partner, until recently, worked here.

I've spent many a happy hour in the Raval, in Boadas, Bar Pastis, El Cangrejo, and the legendary Bar Marsella. And, even though I'm now a Friend of CCCB, I don't get down there as much as I'd want, or, perhaps, should.

…consider yourself in the thick of it. This is a hot sector of the frontline of the city's residents' ongoing battle with mass tourism. You will not encounter many locals here — and those you do will likely be very angry at what they perceive to be the city authority's failure to stand up for them against buccaneering apartment letting agencies. If that doesn't bother you, then you'll doubtless have a great time.

However, if unsolicited encounters with sex-workers, and gangs of drunk, exuberant youths celebrating forthcoming marriages, bothers you then you may want to re-consider your accommodation arrangements.

On the plus side, getting to and from the Airport is a breeze — the Aerobus connects Plaça de Catalunya with both Terminals I & 2.

If staying elsewhere in the city

…you've made the right choice. If you want a relaxing break think of the Raval as somewhere to visit, not stay.

The neighbourhood is most certainly worth a visit — as you'll see from the Arts & Entertainment listings below there's a lot of cultural activity here.

Metro Line 1 (Red) will put you down at Plaça Catalunya and Universitat, both within easy strolling distance of the Raval.

Metro Line 2 (Purple) will put you down at Paral.lel, Sant Antoni and Universitat — on the border with the Raval.

​​Manuel Montalbán, gourmet, journalist, football reporter and creator of the Carvalho private detective series, was born here. A square just off Rambla de Raval is named in his honour.

Manu Chao, musician and activist extraordinaire, lived here off and enduring the late 1980s and early to mid '90s.

Jean Genet, the French writer and playwright, lived here while writing his book, The Thief's Journal.​

In March, 1923, the anarcho-syndicalist organiser, Salvador Seguí, (AKA The Sugar Boy), was shot dead in the street here by 'pistoleros' (gunmen hired by local factory owners — somewhat akin to the notorious Pinkerton's Men). The square immediately next to the Filmoteca, the national film theatre, was named in his honour.

July 13th — July 16th, with a programme of family friendly activities including parades featuring gegants, music concerts, a correfoc, and  castellers (human towers) havaneres (Spanish-Cuban balladeers) and a skating competition — worth checking out if you’re in the area.

La Virreina — Centre for the Image

Monastery of Saint Paul of the Fields

Royal Academy of Medicine of Catalunya

Several sound reasons to seek out La Singular in Barcelona